‘The Twilight Zone’ review: ‘The Wunderkind’ 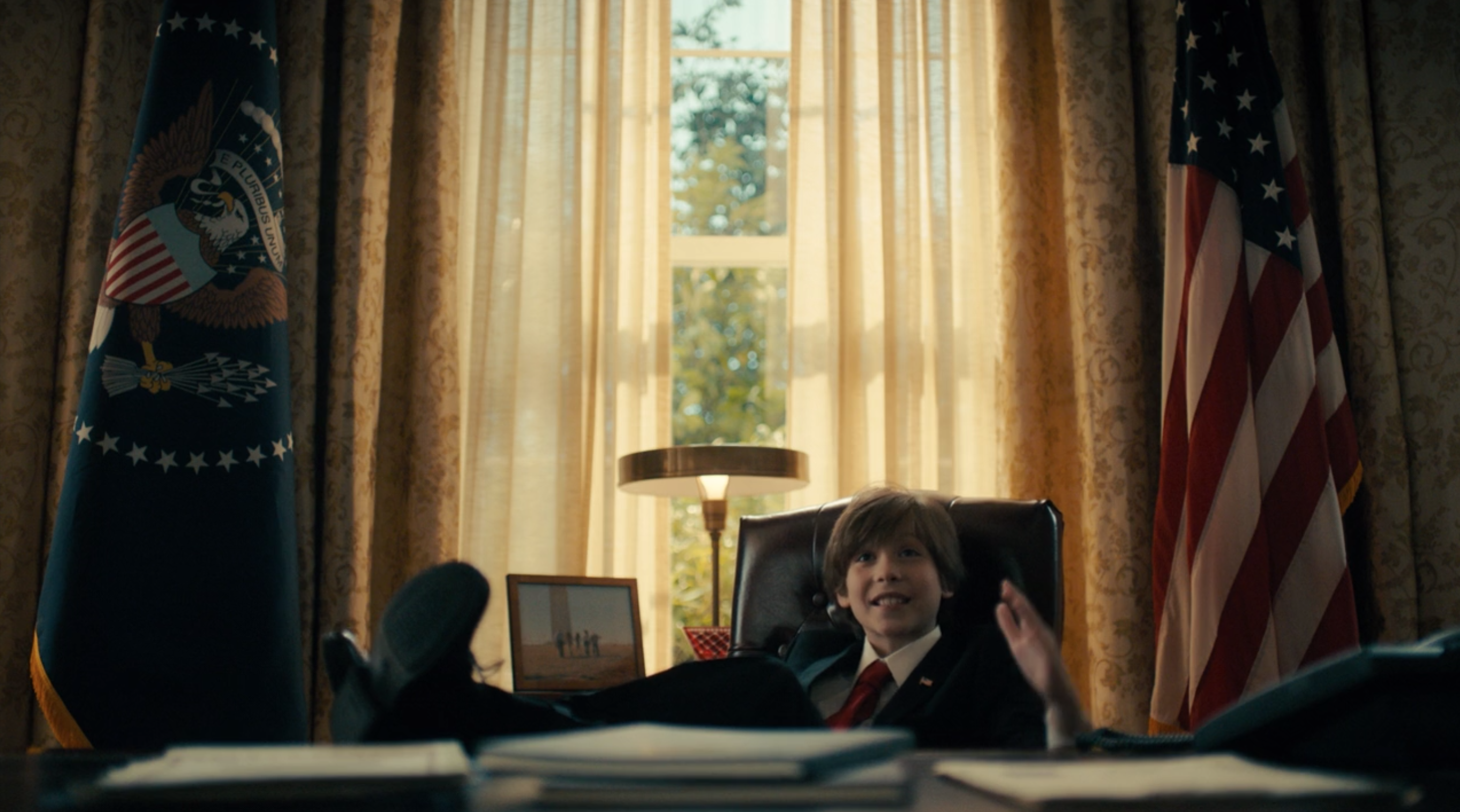 President-elect Oliver Foley (Jacob Tremblay) steps into the Oval Office for the first time, his eyes bright with childlike wonder. He immediately sits at the President’s desk and kicks his feet up and says that he needs to start keeping his promises to the American people. His first order of business: free video games for every American. His advisors look at one another and tell him that there are more important matters at hand. Oliver doesn’t care. He wants free video games for all Americans. Again, he’s told that Congress isn’t going to allow that just yet mainly because the National Debt is out of control and, besides, even if it were possible, gaming companies aren’t just going to give away their video games. Impatient and irrational, Oliver immediately proposes threatening them with major tax hikes that will “put them out of business in a day”. They still balk which makes Oliver bristle. He angrily declares that if it doesn’t happen, he will get people that will make it happen because Oliver gets what Oliver wants. And the American people should have free video games, he declares to a dumbfounded room with but one question on all their minds:

The fifth episode of CBS’s Twilight Zone re-boot gives us “The Wunderkind”, the story about campaign manager Raff Hanks (John Cho), an egotistical campaign manager who has been dubbed “The Wunderkind” for his uncanny skill of getting unelectable people elected. After finally seeing one of his candidates fail miserably, Hanks collapses, becoming a full-fledged alcoholic with no future. The bar has the news on and is running a peculiar story: an 11-year-old boy named Oliver Foley has announced his candidacy for President on YouTube. His campaign promises? Longer weekends and Christmas breaks, more jobs and, of course, free video games for everyone. It’s a joke, right? Not to the American public. They’re all fed up with the imperfect adults running things, fed up with all the lies, with all the politics. They need somebody who “speaks the truth”. Hanks’ eyes light up…he’s back in business.

Oliver is precocious and persuasive and his cuteness overshadows his mental shortcomings — but only for so long. He gets destroyed in his first debate because while he thinks taxes are “good, except when they’re bad”, that’s not an actual answer to the question, “What are you going to do about taxes?” As Hanks braces for another political disaster that will surely sink his career, Oliver’s dying family dog enters the picture — and, like a seasoned running back, the ever-crafty Hanks finds his opening and exploits the unfortunate matter: new campaign ads showing his dog running through sunny meadows while captioning the moment “I WILL HIRE NICE PEOPLE” and “MORE JOBS” and, seriously, who can’t get behind that? You can’t disagree with a dying dog, can you? No, you can’t. Just like you can’t disagree with Oliver’s catchy, feel-good Justin Bieber-esque music videos where he encourages young people to vote…but there’s always the undercurrent of regret: Oliver throws temper tantrums behind the scenes when he doesn’t get what he wants and, when he eventually becomes President, anyone who disagrees with him is dubbed a “traitor” and, thanks to Oliver’s non-stop control over the political narrative (he uses YouTube to air his grievances), the public buys and parrots his declarations to a mass media who hungrily eats the opinions up and regurgitates them, ad nauseam, for the sake of ratings.

Where “The Wunderkind” stumbles, perhaps, is that it might be too clever for its own good. Since Donald Trump was elected in 2016, life for many an American has felt like a living Twilight Zone episode. We’ve already seen countless parodies and skits satirizing Trump and we’ve seen memes featuring black and white images of Donald Trump sitting at his desk with Rod Serling in the foreground, explaining that we were now in The Twilight Zone on social media. So, while it was just a matter of time before a situation like this became fodder for science fiction and fantasy writers, it may feel old hat to the casual viwer. Despite this, the cast and writing. is sharp, with Jacob Tremblay playing Oliver much like Bill Mumy played the young Anthony Fremont in the classic episode “It’s a Good Life”, giving us somebody who’s way in over his head but doesn’t know it because nobody has the guts to tell a child they can’t follow their dreams? John Cho shines as the cocky Raff Hanks, a man who sells himself to people who have no choice but to sell themselves to THE people but whose successful brainchild eventually becomes his undoing.

The episode is written by comedy scribe Andrew Guest (“Brooklyn Nine-Nine”, “Community”), and while the metaphors on display aren’t exactly subtle, they were never meant to be. Guest’s entire motive is to show us where we actually are when we’re done laughing at Alec Baldwin on Saturday Night Live. And he’s only so happy to ask viewers if they’re really happy with what we’ve helped wrought as a society.

And hasn’t that always been the point of this show?