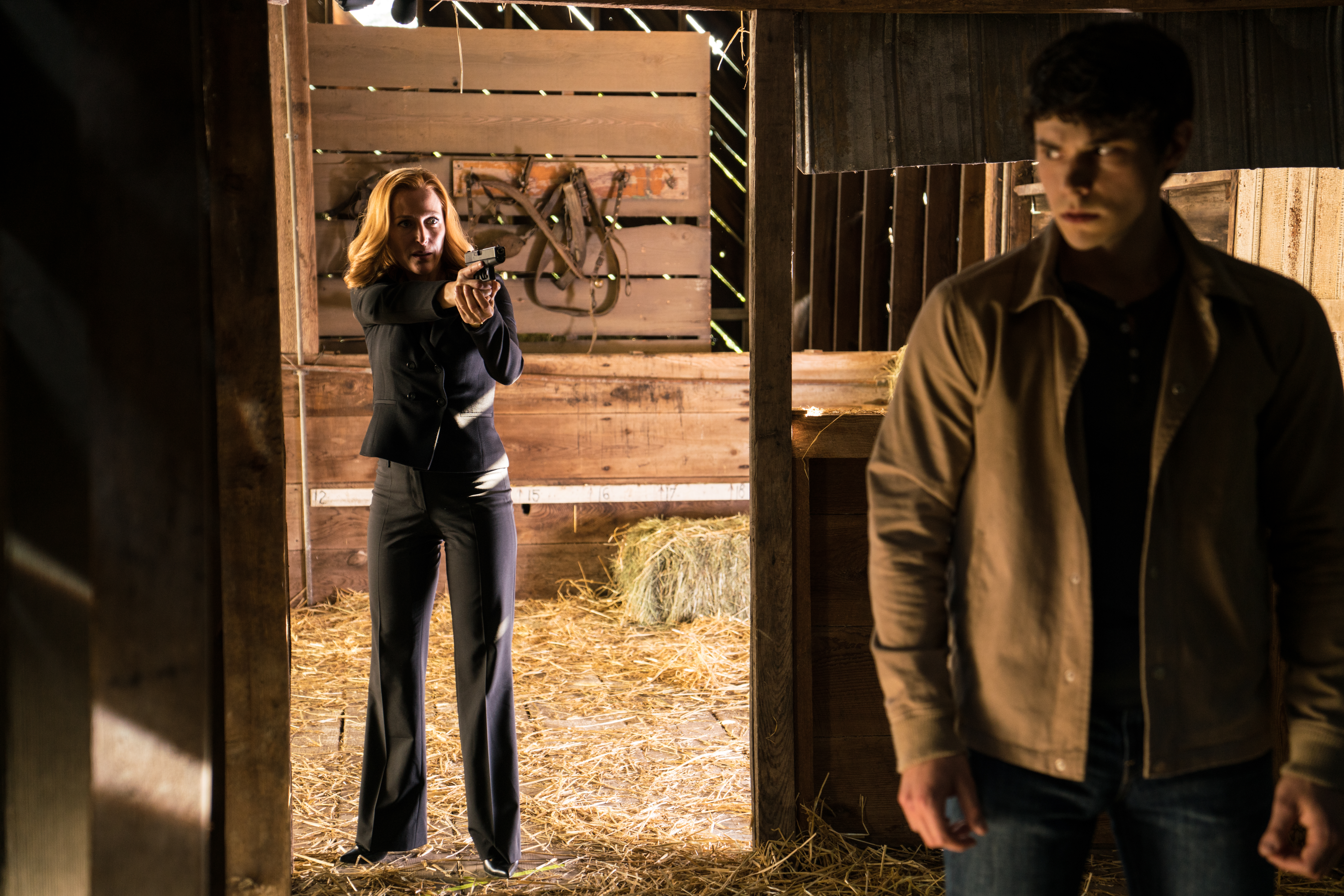 Written and directed by series veteran, James Wong, “Founder’s Mutation” is our first stand-alone, non-mythology effort of the new re-boot of the series and while it’s less convoluted than the premiere, it’s also not much of an improvement. It finds Mulder and Scully reinstated with the FBI without even bothering to explain how or why they were able to just slip back into their jobs, willy-nilly, without so much as a personal, moral debate between the reunited couple who broke up over the madness that was their assignments.

Their latest investigation leads them to a young programmer (Chris Logan) who died under mysterious circumstances that only he (and the audience) is privy to: a painful, piercing noise which lead him to force-install a letter opener into the side of his head in a scene that is gruesome, eerie and disturbing as it is beautiful in terms of execution. Unfortunately, the episode veers wildly off-track, taking us on a maudlin journey through FeelsLand, where we’re forced to revisit the saga of William, Mulder and Scully’s child. This might sound all well and good — if William was interesting. What can I say? I wasn’t a fan of William. His conception is murky as hell because, like a nervous teenage boy confessing his sexual activities to his parents, Chris Carter continues to tell us Mulder and Scully got it on without actually saying it. I can understand placating both sides of the “shipper” community, but enough is enough. Added to this, William’s presence (built up as a sort of “second coming”) was ultimately irrelevant to the bigger picture.

So, why do we have to be subjected to late afternoon sunshine-soaked, LOST-style flashbacks of Scully and Mulder imagining their lives with William in it? Scully takes her son to school, playfully reminding him of how to behave there (“don’t fart”, William says; the material is SO deep) while Mulder raises William on toy rockets and 2001: a space odyssey before witnessing William being sucked into space by aliens just like his sister Samantha. To call these sequences “pandering” would be an understatement. They’re unintentionally humorous, gratuitous and out-of-place and none of it belongs on the show. You think I’m crazy? Check out Mulder’s dismissal of Scully’s pleas of sensitivity to the past: “I’ve made peace and moved on.”

So, then move on already. William was already deemed boring once. Do we have to march through this again? For a plotline that was meant to be a backdrop, it actually ends up overshadowing an interesting, if somewhat goofy, story about mutated children who all look terrible save for one that looks Teen Beat gorgeous and has X-Men-like telekinetic superpowers, resulting in the obligatory final showdown where the evil doctor who enjoyed poking at special kids with needles and sticks ends up with his eyeballs melting, recalling Raiders of the Lost Ark. “You can’t unsee something like that,” Mulder deadpans like a bored James Bond to a perpetually stern, yet puzzled-looking Walter Skinner.

He says these things (as well as his new catchphrase “I’ve heard something similar to that” in response to characters who recite self-serving dialogue like “The truth is in here” and “Trust nobody”) when he and Scully aren’t rattling off jokes about “Google” and “Obamacare”, the showrunners’ strangely annoying and mildly insulting tactic whipped out to remind us that we’ve driven the Television DeLorean from 2001 to 2016.

I wouldn’t say I’m worried about The X-Files because it’s really not possible to worry about this show. It’s so steeped in pop culture and rich in television street credit, a few clunky efforts are forgiven with little trouble. That I’m already using the term “clunky efforts” to describe the first couple of episodes of the show?