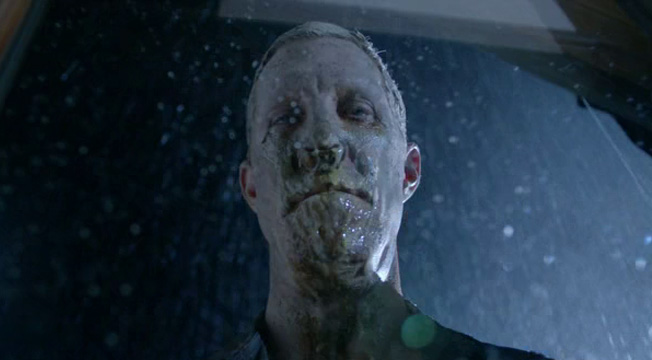 The first thing you’ll notice is that the title of the episode references “Home”, one of the most notorious (and greatest) episodes X-Files fans have ever been privy to watch. That episode was so dark, disturbing and violent, Fox refused to run repeats of the episode. Simply put, it was one of the show’s finest hours. Unfortunately, that little tidbit means a gauntlet has been laid down that the new X-Files cannot possibly beat.

Not that “Home Again” is any less gruesome. While “Home” was shocking for its era (but tame by this era’s late night standards), this episode has the same dark and goopy aims: a supernatural (and highly ironic) antagonist haunts the city streets, driving a garbage truck around and fights for the homeless by forcefully dismembering/decapitating government officials who are dead set on keeping the society’s “trash” away from the elites.

It might not be fair to compare the two episodes but when all you’re doing is tacking on the word “Again” to the title of one of your best episodes, it’s hard not to come across as insanely pretentious. Besides that, it’s really hard to be thrilled about a villain who, in essence, is a soulless version of Candyman (actually named “Band-Aid Nose Man”, for crying outloud), a supernatural being somehow brought to life after being created by a homeless street artist so that he could “defend the homeless” — by murdering morally-objectionable-but-still-innocent people. That isn’t to say that the sequences he features in aren’t effective or well-executed (the scene where “Trash Man” offs an official in her home set to “Downtown” by Petula Clark is an absolute joy to watch), but the entire gist of the supernatural plot is frustrating because of a weird insistence on forcing us to watch Scully sob over Magical Baby William. 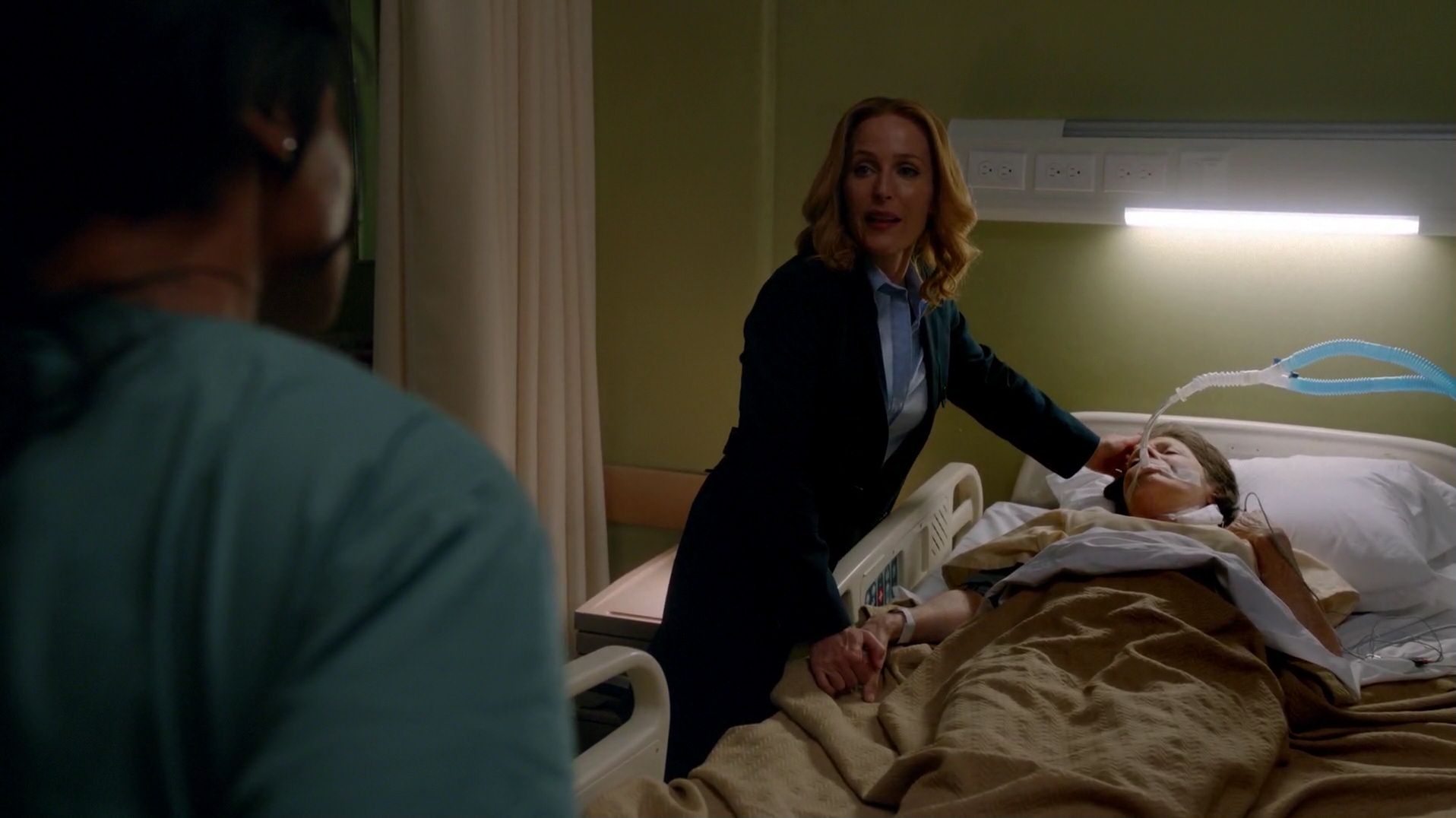 Of course, I’m getting ahead of myself: Scully’s mom is in the hospital, having suffered a major heart attack that has rendered her all but dead. This provides some needed emotional heft but the irony is that the two storylines eventually sabotage one another: on the one hand, you have Mulder running around the city, stepping in ectoplasm and picking up crusty Band-Aids  that doesn’t house any evidence or inorganic matter…whatever the hell that means — it’s got a bunch of something on it so it can’t be totally free of evidence. So what is it? Oh, wait. Scully’s Mom is busy saying cryptic things about William, so now Scully’s a goddamn mess and we have to deal with that thing. Why did Mama Scully mention William for no reason? Does she hate Mulder and Scully for giving him up? Does she think William hates them? What’s going on with WILLIAM?!

Wait a second…never mind. Scully wants to help Mulder look for the thing that’s ripping people apart. Since the Band-Aid that had/didn’t have stuff on it didn’t pay off for Mulder, further investigation finds spray paint that eventually tracks back to “Trashcan Man” (I’m not making this up), the aforementioned homeless guy who created “Band-Aid Nose Man”. The creation, he explains, was to fight for the homeless through art(!), not through limb-ripping, head-tearing violence. Obviously, that didn’t work out. Everyone’s dead and Mulder and Scully can’t even get Trashcan Man to explain how it is Band-Aid Man was able to leap off of building walls, hijack a garbage truck and mow through everyone who hates the homeless community. Something about giving his art “the power”. 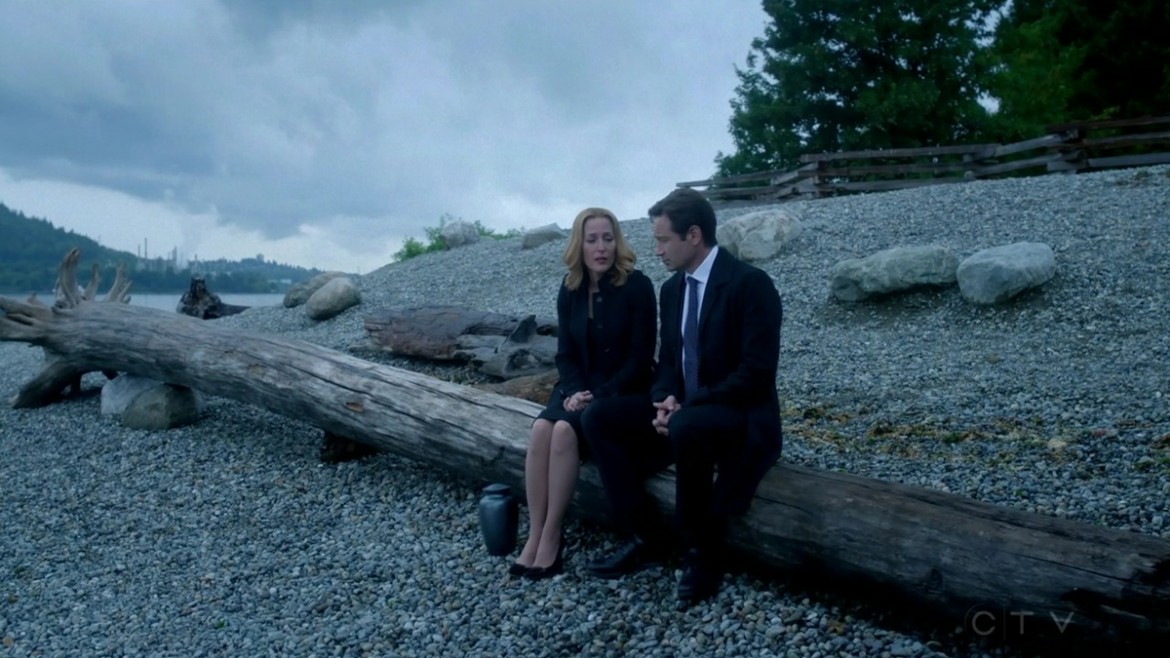 So, Band-Aid Man wins. Nobody really cares and it’s back to Scully’s story: Scully’s Mom has passed away and Mulder has joined her to scatter her Mom’s ashes near the sea, a nice reference to “Beyond the Sea” where Scully has her father’s ashes scattered at sea. We finally get closure on William — I hope. Scully’s very worried that they’ve done the wrong thing giving him away but that she can now accurately answer why it is her Mom said what she said about William: she wanted Mulder and Scully to own what they did. Awfully nice of her to mentally torment Scully on her way out but that’s where this goes. How does Scully put this? “I want to believe,” she says. “I need to believe that we didn’t treat him like trash.”

Nothing about this episode actually lands. The monster is cool. The murder sequences are classic X-Files but that’s all it is: stylish music videos of a creature murdering people. There’s no real explanation of who or what he is beyond his creator having some sort of super power that makes him live and go nuts. Furthermore, the creator’s intent goes against what he stands for, rendering his vision moot and there’s no real point to any of it anyhow except to be a lame reason to tie William MulderScully in with the homeless community (being that they’re “treated like trash”) all so Scully can whimper and sob about William being “treated like trash”. Y’know, just like the homeless. Get it? It’s the shaggiest of shaggy dog stories.

Just so we’re clear, we have yet to have a good episode of the new series and, with two episodes left, The X-Files is running the risk of becoming a revival that never should have been revived.