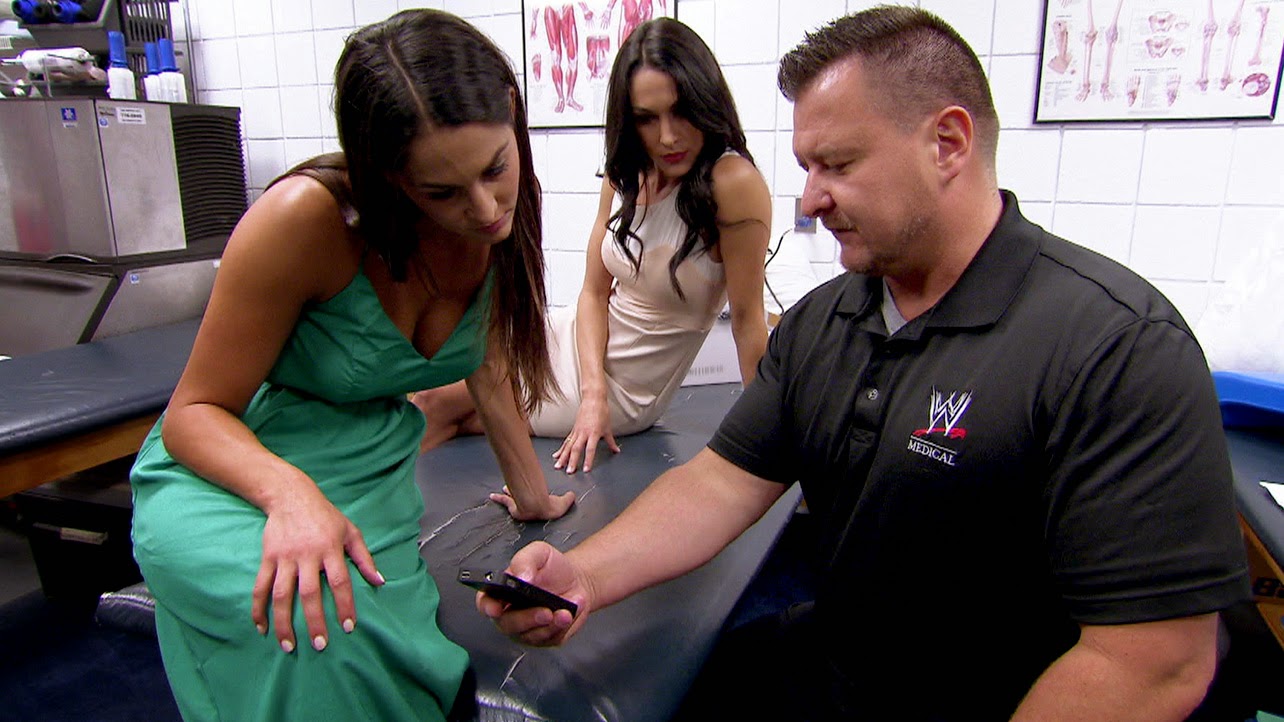 In our last episode, “Diva Las Vegas”, a lot of discussions about (and problems with) drinking occurred as the crew went to Vegas to celebrate Natalya’s Bachelorette and Tyson’s Bachelor party.

Will this week’s episode have lots of drinking? Will Matt Perri stay sober as he’s forced to watch an episode that he enjoys as much as the old movies Joel, Mike, and The Bots watched on MST3K? Let’s find out! (MATT: Too late.)
TAMPA, FL

Eva Marie’s SUV
Eva Marie’s phone rings, and as she takes the call from “Kristin”, the SVP of WWE Talent Relations. She’s lucky she’s in Florida — this is totally legal. Kristin asks, “What’s going on?” to which Eva replies, “What ISN’T going on?”, then giggles like Magical Fire Hair Barbie. (MATT: Oh…I already need more wine…) I wonder what they would do if a Diva crashed her car. Would they film it from a few angles before they offered help? Kristin has exciting news: they want her to do a 1-2 page spread for Maxim Magazine. “Of all the girls, they chose you,” Kristin tells her, which is probably the first and last time anyone has said this to Eva Marie. She says she’s gonna cry because this has been her life-long dream. (MATT: Posing semi-nude in a magazine? Her bar for success is low to the ground.) After hanging up, she literally screams in excitement and claps, making her car lurch forward. (MATT: Don’t bully people, kids. Binge drinking and driving while on your phone? Go right ahead. That’s cool.)
TOTAL DIVAS INTRO
Nikki & Brie Autograph Signing
Brie and Nikki are signing autographs for fans outside of an arena. Nikki talks, on camera, about how the Twins’ return to WWE. They have had opportunities to go to many events, meet celebrities, and she knows they have made it. She’s well rested and cannot get enough of the sport and that she’s “so happy to be back on top”. This is foreshadowing that something will go wrong for her in this episode, of course.
Cameron’s Apartment
Cameron, looking almost Oompa Loompa Orange, is getting ready for a red carpet event. (MATT: Do the Divas get paid by the amount of bronzer they use in an episode?) Vincent, who clearly forgot about that one time in Vegas, is confused why he can’t go. First, she says he has to do papers for the sheriff (job application, plea bargain, we have no idea) and then she says he waited too long to ask her. He pouts that he really wants to go. “Vinnie and I have not been on the same page lately” she says as we see flashbacks from last week where he spilled a drink on her by accident. (MATT: It’s only cool if your last name is “Bella”, Vincent.) He counters that he blew off time with his friends to spend time with her because, apparently, healthy couples don’t need time apart or separate nights out with friends. He and Eva Marie should do an advice column together. She closes the door in his face (MATT: In the most condescending manner possible.) to the bathroom to do her makeup “in peace” and he opens it because he’s that codependent. (MATT: Or sane.) She screams so loud for him to stop that she’s lucky that no one called the police to investigate. (MATT: It was a prolonged “STOP” which made the dog leave the room in fright. If I were Vincent, I’d be packing my things and leaving. Why is nearly everyone on this show wholly unlikable?)

SAN DIEGO, CA
John Cena’s House
John is being worked on by a trainer. Nikki comes downstairs, wearing a red bra top that has half of her boobs spilling out. She hears Cena groaning in pain, walks by and calls it “the money shot” because everything is porn in her world. The trainer (no name given) says he is increasing flexibility to cut down chances of injury. Nikki tells the camera that their job is tough especially with respect to injuries. “Doctors have said every time we hit the mat, it’s like a car accident,” she tells the camera, “so, we have a stretch therapist over and I’m excited to try it.” The therapist touches her and she moans and breathes hard in a most exaggerated fashion. If you don’t watch the screen you’d think she was filming a porn, back me up on this, Matt? (MATT: I…uh…she’s…he’s…uh…the noise is…) She’s so tight, (MATT: No comment.) muscle wise, another unnamed therapist comes over. Cena looks down her shirt, cause he owns every thing in this house, including Nikki, and says “It’s hard to not just stare down into your femininity”. When she reacts to that, he claims he meant her eyes. Sure, he did. Cena laughs, and the trainers laugh cause he’s paying them. (MATT: And they don’t want Cena to rip off their heads and take their souls.) Nikki kisses him and whispers that as she’s more flexible now they should enjoy it for a few minutes before dinner, or as he suggests, “maybe a few hours afterward”. The editors, ditching any semblance of subtlety, show us gushing fountains at a park just in case anyone missed the fact that they are talking about sex.
GRAND RAPIDS, MI
Hop Cat (Bar)
JoJo, Eva Marie, Cameron and Natalya are having a meal. Natalya is jealous that JoJo can eat anything she wants and not put on weight. (MATT: Then they all laugh, pretending like they’re not purging and barfing up the one French fry they ate.) Eva Marie tells them her news about Maxim. The girls seem mostly happy except for Natalya, who tells the camera, “As much as it pains me to say it, Eva Marie has an It Factor”. I think Natalya means the hair which is certainly one heck of a gimmick. I changed my store bought red locks up a bit this week, Matt said I looked like Eva Marie, (MATT: Suddenly, everyone on Scott’s Blog of Doom hits Danielle’s Facebook for a pic.) but hers is more Raggedy Ann red than mine even with the new color, luckily. Cameron, somehow forgetting that Eva would lose a dance-off to a house cat, says that Eva’s sudden rise means she could lose her job. JoJo tells the camera that she needs to get noticed more, but she can barely get noticed on this show, let alone be taken seriously in the WWE as a whole. (MATT: “Get noticed more”?! She’ll have to really work on that…)

Backstage
The Funkadactyls and JoJo warm up for their singing act. Vince McMahon comes by to watch the girls, get a free cameo and tell them that he’s looking forward to their performance. Hmmm..just a few minutes left in the show and it’s going to go well, right? WRONG! Naomi suddenly has a horrible barking cough out of nowhere and is “sick as a dog” despite being perfectly fine 7 seconds ago. She’s having coughing fits and gets told it’s just nerves by JoJo.
CHARLESTON, NC

North Charleston Coliseum
JoJo confesses she has never sung in front of a crowd before. Eva Marie and Brie, ever the pep-talkers, agree this has the potential to go really wrong as it’s live.

In-Ring
The Funkadactyls and JoJo are ready to roll. Cameron is there to talk up the others a bit. JoJo and Cameron sing and they sound awful. A fan is shown covering his ears. Jane Geddes looks on with a look of despair, puzzlement and disgust.

JoJo says on camera that they sound awful, a remark backed up by Eva Marie who says on camera, “What goes around comes around — and this is what JoJo gets for not supporting me.”

Backtage
The Divas are all there discussing the act, Cameron tries to downplay just how bad it was. JoJo tries to act as if they were only off on harmony here and there.

Mark Carrano, Senior Director, WWE Talent Relations comes to see The Bellas. Nikki jokes she is “just crutching around” and Mark says that’s why he’s meeting with them. He tells her that limping on crunches “is not Bella like..it’s not Diva like”. So, she’s out of work for 12 weeks. She complains about being almost 30 and her wrestling career possibly over. (MATT: She’s done, even with her slightly fractured shin and a return timetable of three months. What a tragic turn of events.) She pretends to limp off in disgust.

DANIELLE:
This week’s hugs gs to – Cameron and Vincent – it’s hard to know when it’s time to change your relationship, whether to take it to the next level, step back. or in some cases walk away for good. They both are surrounded by pressure – him by his dad (I’d say his friends but we haven’t even seen them) and her by her fellow Divas who are a defacto family for her. At the same time, they both acted immaturely this week from her walking out of the store without a word to him giving her space, yet not really letting go, but they seem genuine in their confusion and feelings for each other.

This week’s punch goes to – Eva Marie – I get it, she’s hot, she has red hair and a sexy body, she’s psyched that she’s getting some real attention for herself and that’s great. But instead of talking with JoJo about her feelings, and caring about her, she talked about her behind her back and was actually happy when she failed live on stage. Real friends, and I do think proximity and shared experiences have made these two real friends and Eva Marie this week acted like she had never had a real friend with her behavior. The other girls barely tolerate her, and she should try to be a real friend to the one who genuinely likes her company.

MATT:
This week’s hug goes to: Eva Marie. What a woman. Does what she does to get ahead while her idiot roomie, JoJo, fakes her way through life just because she used to sing back when Savage Garden was on tour.

This week’s annoying people are: Cameron, Nikki, and Brie. When are these three NOT on the list? Week by week, Cameron is a superficial brat. Nikki and Brie enable her. It’s kinda sick. They all act like spoiled little snobs and it’s gotten to the point where it’s become difficult to watch them.