Hello and Happy Labor Day Weekend, everyone, and welcome to Weekend Movie Brawls!

August has come to an end and we have a very big battle between two films which mix live-action with animation. This week’s battle could be a battle of generations: the old school vs. the new school and the passionate debate the latter film brings about is absolutely legendary.

When Marvin Acme (the man behind every single cartoon gadget in the Looney Tunes cartoons) is murdered in his own factory, cartoon star Roger Rabbit (Charles Fleischer) is considered the #1 suspect due to the fact that he was, uh, “playing patty-cake” with Roger’s wife, Jessica (Kathleen Turner). The truth, however, is that Roger’s been framed. With Judge Doom (Christopher Lloyd) breathing down Roger’s neck (and threatening his execution with a newly-invented substance which can actually end a Toon’s life, it’s up to Detective Eddie Valiant (Bob Hoskins), who has a personal hatred of ‘Toons after one murdered his brother years prior, to solve the mystery and bring the real killer to justice. Directed by Robert Zemeckis. 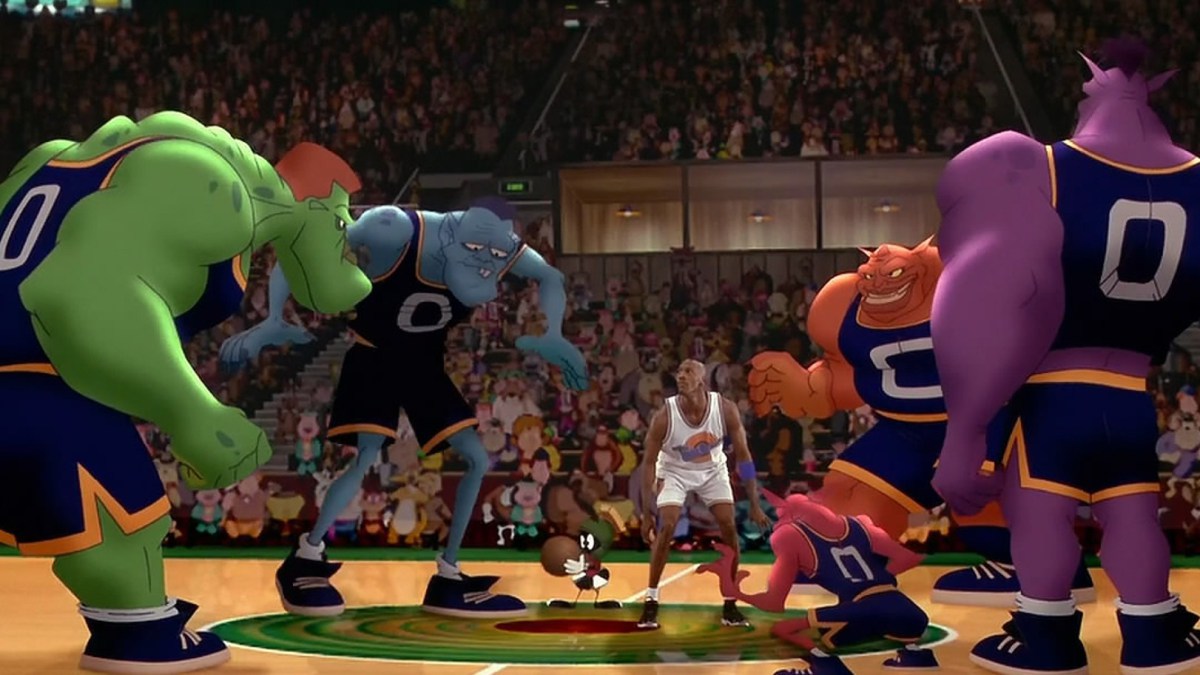 Cartoon aliens have invaded the cartoon home of Bugs Bunny and all of his friends. They aren’t impressed with the tiny little aliens and challenge them to a basketball game where the winner gets to do what they want and all is well — until the aliens steal the abilities of the NBA’s best players and use their newly-acquired talents to beat the Looney Tunes senseless. After taking a shellacking at their hands, they abduct a newly-retired Michael Jordan and ask for his help to even the odds in a winner-take-all basketball game. Directed by Joe Pytka.

We’ve met Alan Silvestri before during the “Predator” battle where he composed the scores for two of the four films. Along with “Back to the Future”, this may be Silvestri’s best musical score. He not only channels the brassy Looney Tunes stuff, he also creates a great tapestry, mixing in tasty saxaphone-laced noir cues with his usual heavy, adventurous scoring stuff. It’s a score which excites and exhausts you as many of Silvestri’s 80’s and 90’s scores did. It’s great work.

The score was conducted by James Newton Howard and it’s like a knock-off of “Roger Rabbit” but it’s more declarative, full of big orchestral hits. It’s more or less an action score. Howard did better with stuff like “Batman Begins” and “Unbreakable” and there’s nothing memorable. When Howard’s score isn’t being showcased, the soundtrack pumps every pop anthem you’ve heard at a basketball game — and culminates with “I Believe I Can Fly” by R. Kelly…we’ll just leave that there.

Veteran actor/comedian Charles Fleischer plays the voice of Roger Rabbit here with the late, great Bob Hoskins playing Eddie Valiant. Fleischer brings a charming, sympathetic sweetness to Roger which runs contrary to Hoskins and his stone-faced demeanor. Kathleen Turner plays the voice of the now-legendary knock-out, Jessica Rabbit who has some sort of weird affair with Marvin Acme, portrayed by legendary veteran actor/singer/vaudevillian, the late Stubby Kaye. Christopher Lloyd is Judge Doom, who is hell-bent on punishing “‘Toons” for their crimes. The human actors in the film are largely over-shadowed by the animated characters which carry the film and end up becoming legends.

Michael Jordan plays himself as do a bunch of other basketball stars like Charles Barkley, Larry Bird, and Patrick Ewing. Danny DeVito is here, playing the voice of the cartoon alien, Swackhammer. Seinfeld’s Wayne Knight is Stan, one of Jordan’s assistants. Bill Murray also plays himself. Once again, the human cast is fairly overshadowed by the animated cast, which is familiar to anyone who has watched the Looney Tunes. The problem is that all the main voice actors for the Tunes have moved on or are gone, so the voices sound awkward. Kids won’t care but adults will notice. The acting sucks on toast, as laid-back as the athlete actors are in the movie. Bill Murray is the only thing worth watching — but he’s doing Bill Murray and that’s fairly old hat.

The story is clever. The writing? That may be the film’s weakest element. It’s not a BAD script. Based on Gary Wolf’s novel “Who Censored Roger Rabbit?”, the script was Disney-fied for your protection, eliminating much of the seriousness and adult portions of what Wolf wrote. Despite this, there are still shades of the novel seen here in vivacious Jessica Rabbit and the “Dip” sub-plot, but rather than a straight murder mystery set in present time, the film is set in old Hollywood and turns out to be more complicated and less hard-boiled. The dialogue is mostly throw-away stuff but the overall cleverness of the idea (Toons living with human beings) is what shines with some great inside baseball for old-school cartoon lovers.

The entire thing was a Nike commercial extended out to a torturous 90 minutes. The script sucks. The entire idea works better in a one-minute Super Bowl spot than it does in a 90-minute cinematic experience. The dialogue is crap and the idea that the Looney Tunes live in some secret universe underground, away from humans feels like Roger Rabbit Lite. The script tries to be clever by being meta (Wayne Knight telling Michael to “Get your Hanes on, lace up your Nikes, grab your Wheaties and your Gatorade, and we’ll pick up a Big Mac on the way to the ballpark” IS funny) but there isn’t enough of this kind of wit to stretch over 90 minutes.

Robert Zemeckis is one of the greatest directors of all-time just for having directed films like “Back to the Future”, “Romancing the Stone”, and “Forrest Gump”. This is, easily, one of his masterpieces, bringing the same wonder, imagination, and breathless execution of action sequences to this film.

Like watching a 90-minute Nike commercial. It’s big and loud and colorful and in your face. Joe Pytka does a decent job of controlling the chaos but more than half of it, set in the animated world, is ironically without any style. This might have been in better hands with somebody who understands the material like, say, Joe Dante.

This is a classic film. I cannot say enough good things about it. From the classic Hollywood setting to the stunning animation (each cel was hand-painted, shaded and lit, for crying outloud…they were actually affected by the light and emitted shadows) to the optical and visual effects shots which were accomplished without the benefit of CGI. Imagine that. The effects crews had to construct the sets a certain way and utilize robotic puppets carrying actual, physical props. These robots were covered with the aforementioned cartoon cels by the effects department. The final product was absolute movie magic. The animated characters looked like they were really there and the human actors interacted perfectly with them. The in-jokes will charm kids but will also resonate with adults (Acme’s gadgets and gags are a riot — including a “singing sword”, an animated sword that looks like Frank Sinatra and sings “Witchcraft”, something which is used to break the tension in a fairly intense scene near the end of the movie) and the normalization of animated cartoon characters living with real people makes for some good laughs. The part where Eddie’s girlfriend, Dolores, tells everyone that Eddie’s brother was murdered by a Toon who “dropped a piano on his head” with a straight face is just priceless stuff. Eddie’s reluctant adventure into Toontown is also awesome stuff. It’s just a great film.

“Space Jam” is a giant Nike commercial. It came out as a commercial and expanded when Warner decided to make some of that NBA money. It coincided with Michael Jordan’s return to basketball (following his “retirement” which was basically because he had a gambling problem and the NBA didn’t want to suspend their prime television meal ticket). It’s a shrewd film. Despite the animation budget (it uses the same lighting and shading techniques “Roger Rabbit” did for its animation cels), the movie is just big, loud and dumb. Suddenly, the Looney Tunes put their collective asses on the line by (I’m not even kidding here) gambling on whether or not they can beat hostile cartoon aliens in a basketball game — which is so stupidly arbitrary since they never cared about it before but, hey, Jordan’s in the film eventually, right? It’s just cheap and forced. Watching Elmer Fudd dunk a basketball while wearing a full on jersey and shorts and a headband is just plain embarrassing. It’s the type of cynical film Hollywood idiots make and then laugh about it while spraying each other with $1000 dollar bottles of wine while feeding $100 dollar bills to strippers. It’s just the worst. I don’t even know why there’s a following for this film. And this is coming from somebody who grew up with and LOVES cartoons and the Looney Tunes. 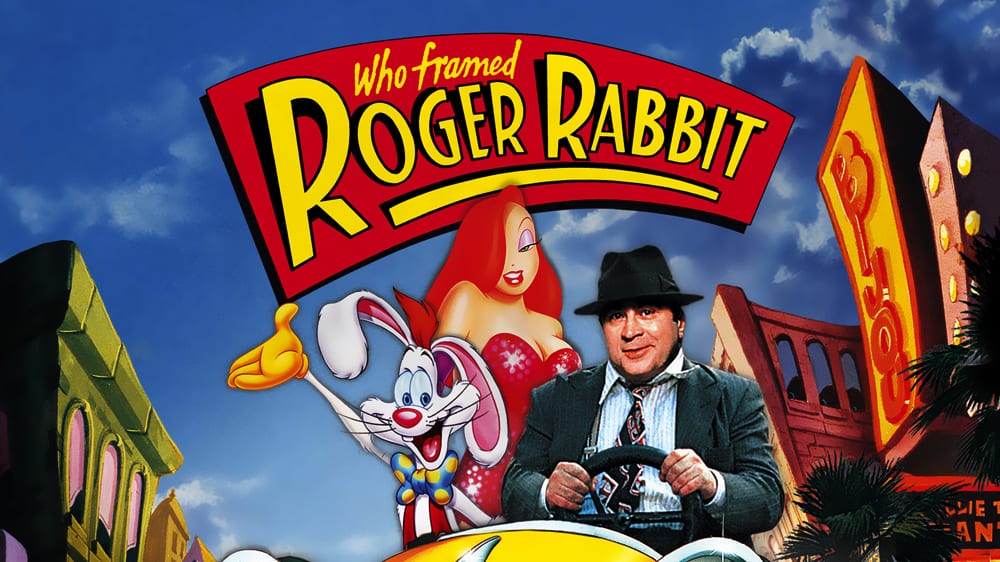 It wasn’t close as it turns out. Whereas “Space Jam” was using Bugs Bunny to sell Michael Jordan to the public again, “Who Framed Roger Rabbit?” was a homage to the old days when cartoons were zany and delightfully nihilistic. The sheer amount of care and love and detail that went into the latter film shows. “Who Framed Roger Rabbit?” is a masterpiece of American cinema.

NEXT WEEK: To be determined…