We’re on the second-to-last week of August and the heat is still on. Here at The Brawl, it’s Ladies Night, and have we got a battle for you. Get your singles ready because it’s a Battle of the Male Strippers! 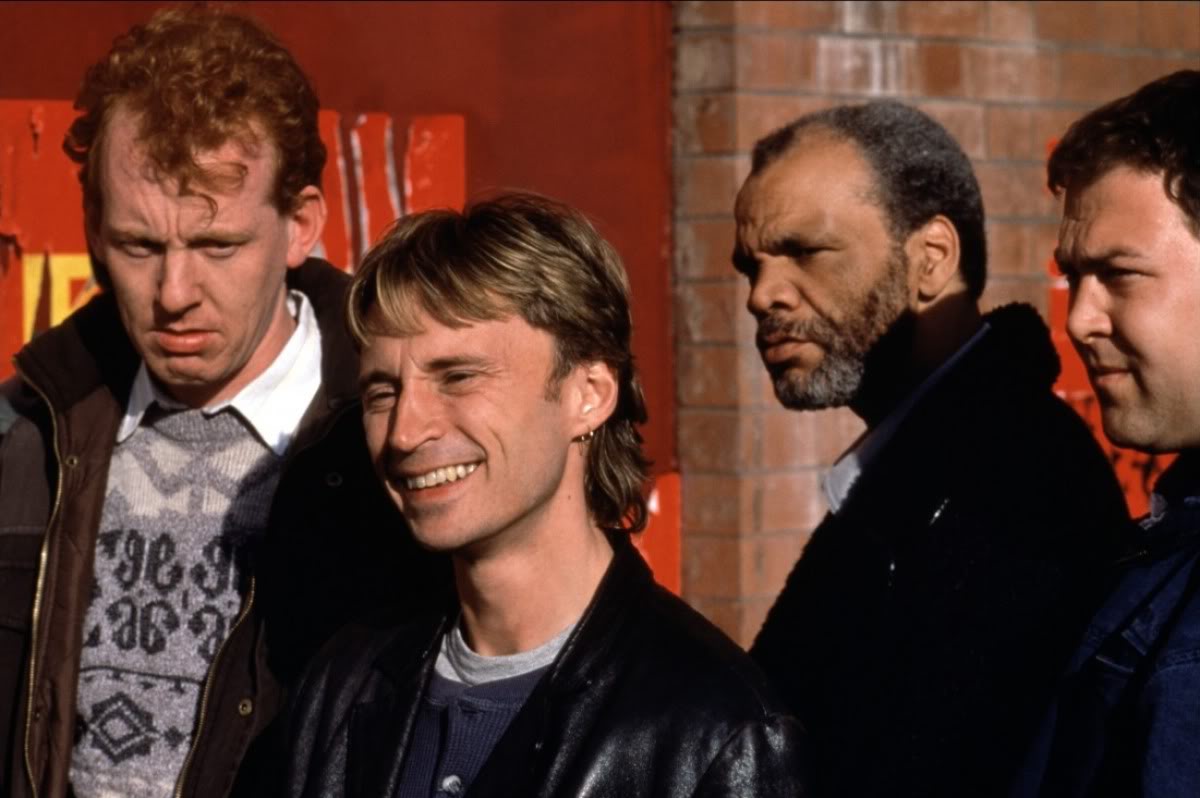 “Gaz” (Robert Carlyle) and his friends are out-of-work industrial workers. On top of being unemployed (and unable to find any work), each of the gang has problems ranging from marital insecurities to child custody drama to depression. One night, Gaz sneaks into a Chippendales dance club and sees the female clientele shelling out big-time cash to the dancers — and he proposes to his friends that they put on a one-night only act and go “The Full Monty” (full nudity) in order to earn their way back to the top of their games. There’s only one problem: they’re all pretty much average guys that don’t actually look the part…but Gaz is convinced they can do it and get the money they need and regain some of the self-worth they lost to begin with. Directed by Peter Cattaneo. 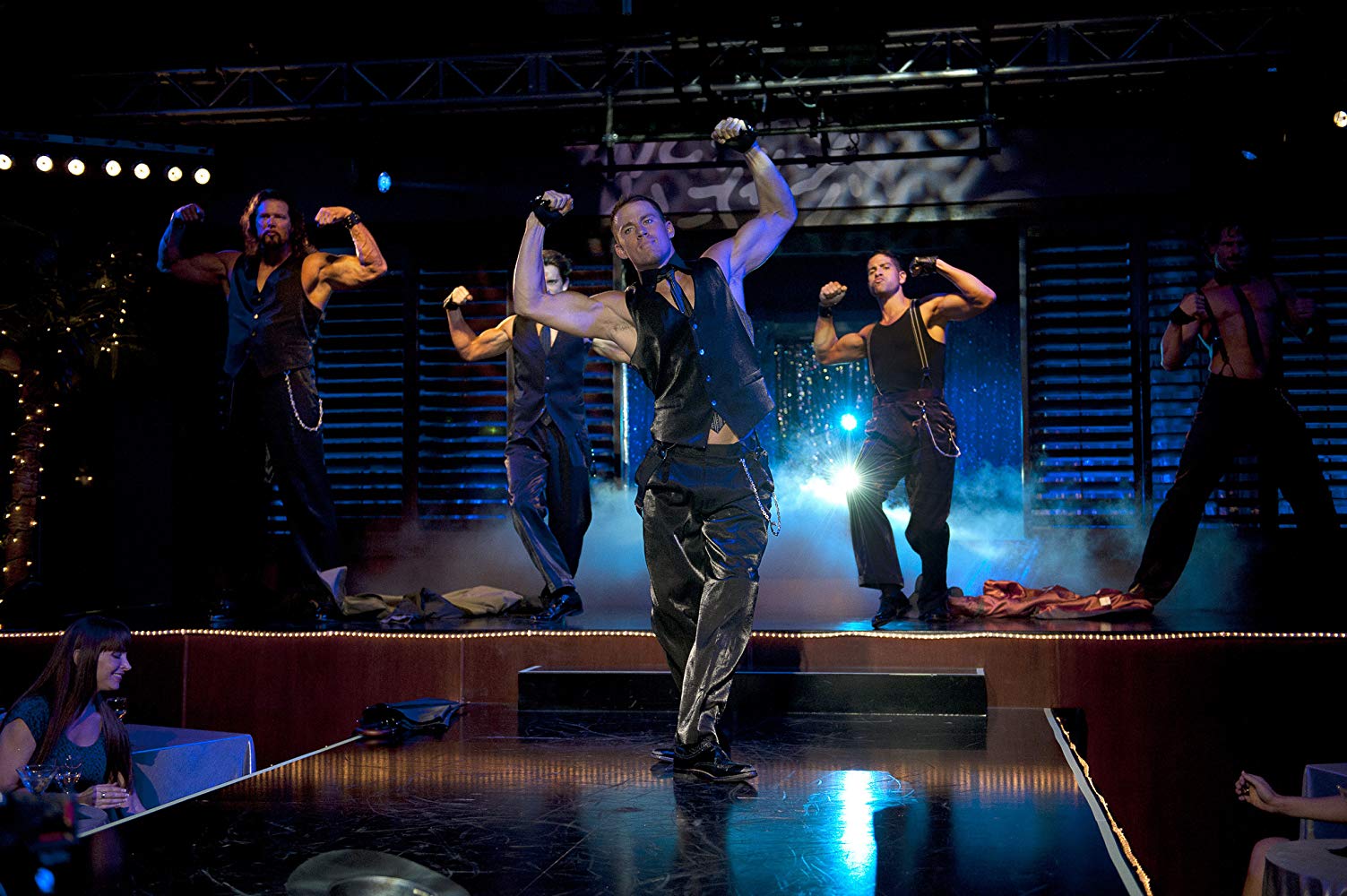 Mike Lane (Channing Tatum) is a roofer by day and the star attraction of a male stripper act dubbed “The Kings of Tampa” by night. He’s great at what he does and the act is insanely popular — but Mike wants out of the life because he knows he can’t do it forever. He has his sights set on a small business venture, building unique furniture. This entire thing is thrown for a loop when Adam (Alex Pettyfer), one of Mike’s workmates on his roofing team, is brought into the fold to repay Mike for getting him into an exclusive nightclub — and unintentionally becomes part of the act. Directed by Steven Soderbergh.

A core member of the Synth-Pop group “The Art of Noise”, composer Anne Dudley did the score for the film. It’s very sneaky and clever, I suppose. There just isn’t much of it. The entire score is allegedly around 10 minutes. The rest of the film’s soundtrack is your typical mix tape of pop songs you might or might not hear in a strip club. Dudley won an Oscar for her score and I’m still not sure how that happened. Danny Elfman’s score for “Men In Black” was nominated the same year and was far better. And this is coming from somebody who grew up on The Art of Noise and is a huge fan of Dudley’s work. I hate to break it to you, but Elfman should have won the Oscar that year — but the Academy simply hates Elfman. The only reason the Academy forked over the award to Dudley is because “Titanic” was the film winning every Oscar in 1997 and “The Full Monty” was a simple sympathy vote. That said, what there is of this score is cute. It’s just not “great” by any means. The pop cuts are decent and they’re used well within the film — especially Donna Summer’s “Hot Stuff” which serves as the background music for a hilarious scene in a British job centre.

There’s no score for the film save for a contracted piece by Jack Rayner who composed the military stripper piece in the middle of the film. The rest of the film is comprised of pop cuts — but they’re fairly unique selections. “Pony” by Ginuwine is Mike’s signature song. Countre Black does a breathy cover of “It’s Raining Men” while Matthew McConaughey actually wrote and performed a piece of his own for the film. Everything fits into the film and doesn’t feel like somebody said “This would be a good stripper song.”

It’s a British film with a great British cast. Everyone here is great. Robert Carlyle is attractive and fun while his group of guys are very sweet. Mark Addy is wonderful as Dave, an overweight man who is sure that his wife wants somebody who’s more like what she sees on the Chippendales’ stage when she goes out with her friends. Tom Wilkinson is great as Gerald, an aging man nearing the end of his shelf life. The main issue is the lack of depth in the other characters. We hear their stories but the film doesn’t have time to actually show you everything, so to speak.

Channing Tatum and Matthew McConaughey are already great choices for the leads. Tatum brings a very genuine charm to the role of Mike while Matthew McConaughey plays “Dallas”, the man who owns the club and the show. He’s all business. He was nominated for an Oscar for the film but didn’t win it — though he would for “The Dallas Buyer’s Club” a year later. The cast is nicely rounded out by Olivia Munn and Cody Horn who play Mike’s friend-with-benefits and a girl who Mike tries very hard to woo, respectively. Alex Pettyfer perfectly plays Adam with a sense of innocence while the rest of the strippers are comprised of Joe Manganiello, Matt Bomer, Adam Rodriguez, and former wrestler Kevin Nash (he was “Diesel” in WWE and played a version of himself in WCW while he was in the nWo), who plays “Tarzan”, the act’s oldest stripper who can’t move all that well anymore. All of them are perfectly placed in true Soderbergh fashion. Even Gabriel Iglesias has a small, but no less useful role as the club’s DJ, Tobias.

Simon Beaufoy was the screenwriter for “The Full Monty” and it’s a great premise with some wonderful self-deprecating dialogue as the boys try to work through their personal (and physical) insecurities and worries. Beaufoy didn’t get any love from us Americans but his script for “Slumdog Millionaire” would.

Reid Carolin wrote the script for “Magic Mike” as well as its sequel, “Magic Mike XXL”. Next to a documentary feature, those are the only two things Carolin has written. It’s not that the script is terrible, the cast does their thing so naturally, it just seems like everyone read a story outline and improvised everything. The story is straightforward, what there is of it. It’s more or less a slice of life then it is a “story”. At times, it feels like watching a documentary about these people. It’s not completely riveting but it’s fun to watch.

It’s a modest production. Low-budget but charming. Simple cast and simple story. There’s not a whole lot of style or much going on and a lot of it requires patience in the big lead-up to the climatic stripping scene where they finally go “The Full Monty”.

Steven Soderbergh makes every film look beautiful. He could make a movie of a man reading the phonebook look interesting. His photography is colorful, the cast is eclectic (I seriously had to double-take when I saw Kevin Nash in the film — but even HE works) and everyone seems right at home.

As I said, Peter Cattaneo directs a no-nonsense film that’s straightforward and doesn’t show much style. It’s a film…and Cattaneo went to TV after directing three more films and he’s been there ever since.

Steven Soderbergh injects everything he has into this film and makes one that seems strangely personal and affecting despite the subject matter. Soderbergh frames his shots beautifully and has a gritty, colorful look. 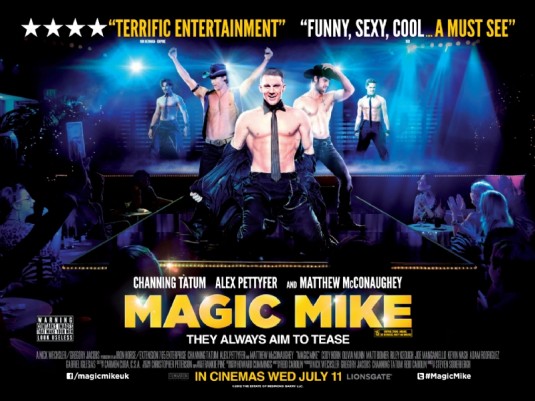 In the end, it was an easy choice. Despite “The Full Monty” being a sleeper hit in 1997, it can hang with bigger films but can’t top them. “Magic Mike” was a Soderbergh baby. Despite losing last week’s contest, Soderbergh rebounds with a huge win over a brother in arms…or a brother in…other appendages, perhaps…anyhow…

NEXT WEEK: We’re gonna do a battle that may or may not piss off the entire Internet…it’s “Who Framed Roger Rabbit”…versus…”Space Jam”…prepare to get a little animated in the comments! See you then!