‘Wonder Woman 1984’ review: A wonder of a miscalculation

It’s 1984 and Diana Prince (Gal Gadot) is fighting crime as Wonder Woman while also keeping a day job as an anthropologist next to Barbara Minerva (Kristen Wiig). When the two happen upon a stone they both deem near worthless, they become fast friends while working to determine the object’s origin. When Diana finds out that the stone is said to grant wishes, both she and Barbara (for fun) make separate wishes: Diana wishes Steve (Chris Pine), her old flame from 1918, would return, while Barbara wishes to “be just like Diana” — unwittingly inheriting Diana’s abilities and powers. Meanwhile, a local sleazy oil tycoon named Max Lord (Pedro Pascal) has been on the hunt for the very object Diana and Barbara are studying. Knowing just how powerful the stone is, Lord makes an attempt to obtain it in order to get his struggling corporation off the ground so that he can finally get rich and have a taste of the power he’s been desperately seeking.

The ninth film in the “DC Extended Universe” film series, there’s a lot going on in this film. After the Harley Quinn/Birds of Prey film, my faith in Warner Brothers was somewhat restored. After this film, though? WB’s DC film division would do well to burn everything down and start over from scratch. Nearly every film they’ve released has been a critical disaster.

And I can already hear you telling me “Not this film…the first Wonder Woman was pretty good entertainment, so how bad could it possibly be?”

Let me toss you a little teaser…

Steve returns, inhabiting the body of some random guy. Who’s the guy he inhabits? Who knows? The movie doesn’t even bother to tell you how this works or why Diana’s cool with the idea of boinking pseudo-Steve in the body of a rando. Oh, yeah…that’s a thing that happens. Gone is the idea of Diana as a strong, independent female character. Here, Wonder Woman is reduced to the likes of Bella Swan in Twilight: a horny, lovesick teen who’s ready to drop her panties for a guy wearing a Second Life Steve skin just seconds after the two are reunited.

And don’t even get me started on an arbitrary scene where Steve and Diana fly a plane over D.C. as fireworks are shot off around them because, also, “it’s the 4th of July”. That’s right. I mean, I’m just glossing over the fact that Steve and Diana just walk into a hangar and STEAL A GODDAMN JET (or the fact that she can turn the jet invisible with her powers…for some reason) because I don’t want my stress level too high these days, but there’s literally no mention of the holiday for the first hour and, suddenly, Diana arbitrarily declares that it’s Independence Day all because the writers thought it would be a cool visual to have the two of them fly through fireworks. All of this while Steve is in awe over the concept of fireworks?

Can I just reiterate how fucking stupid and odd it is that Diana doesn’t give two shits that Steve is literally inside of the body of some random dude? And that she just has sex with him without question?! 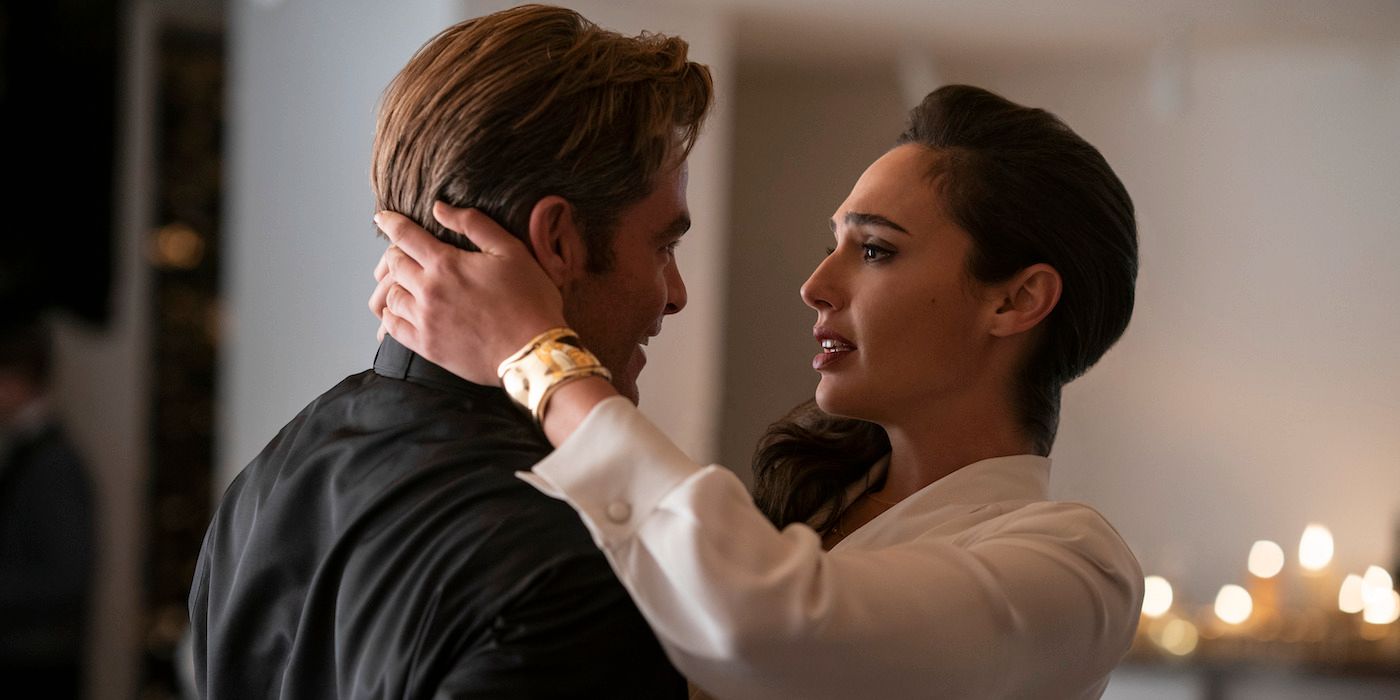 Director Patty Jenkins helmed the first “Wonder Woman” film and while I thought it was safe, the film had genuine moments of awe and wonder. This time around, Jenkins also worked with returning comic book writer Geoff Johns…and what came out of their word processors is an abomination.

The movie is set in 1984 for some reason. I don’t know why. It just is. I mean…it’s in the title so you’d think that it’s gonna be something important. Is there an evolution of character? Does Diana learn something new that she didn’t know in 1918?

And, no, the lesson gleaned from the film’s ridiculous opening doesn’t count.

Hang on. I promised I wasn’t going to go the hyperbolic route and lay everything on the table, but I just have to at this point since the genie’s out of the damn bottle.

The movie begins with a flashback of young Diana, about five years old, as she ‘s about to race in a goofy Amazonian Triathlon (picture “American Ninja Warrior”, only every obstacle is like 80 feet tall and requires firing arrows while riding a horse) where she almost bests a bunch of adult Amazonian women — if only she hadn’t “cheated” and taken a shortcut to keep pace with the rest of the women racing. The Queen disqualifies her just as she’s about to win and chides Diana, saying “You didn’t win because you’re not ready to win.”

What?! What kind of sense does THAT make?

Before this, it’s obvious that Diana is something special, a real wunderkind. She’s not only going against the best at five years old, SHE’S LITERALLY RACING — AND DEFEATING — ADULT WOMEN, using her size advantage, ingenuity and intelligence to put her over larger, stronger opponents. She dodges traps because they’re too large to take her out, she thinks about the moves she makes instead of using brute force, so it’s basically already a “cheat” that she’s able to do things the others can’t — but using a shortcut is where the Amazonians draw the line?

Come on. Forgiving the fact that the sequence is as needless as the Pod Race in “The Phantom Menace”, this is just plain lazy writing. 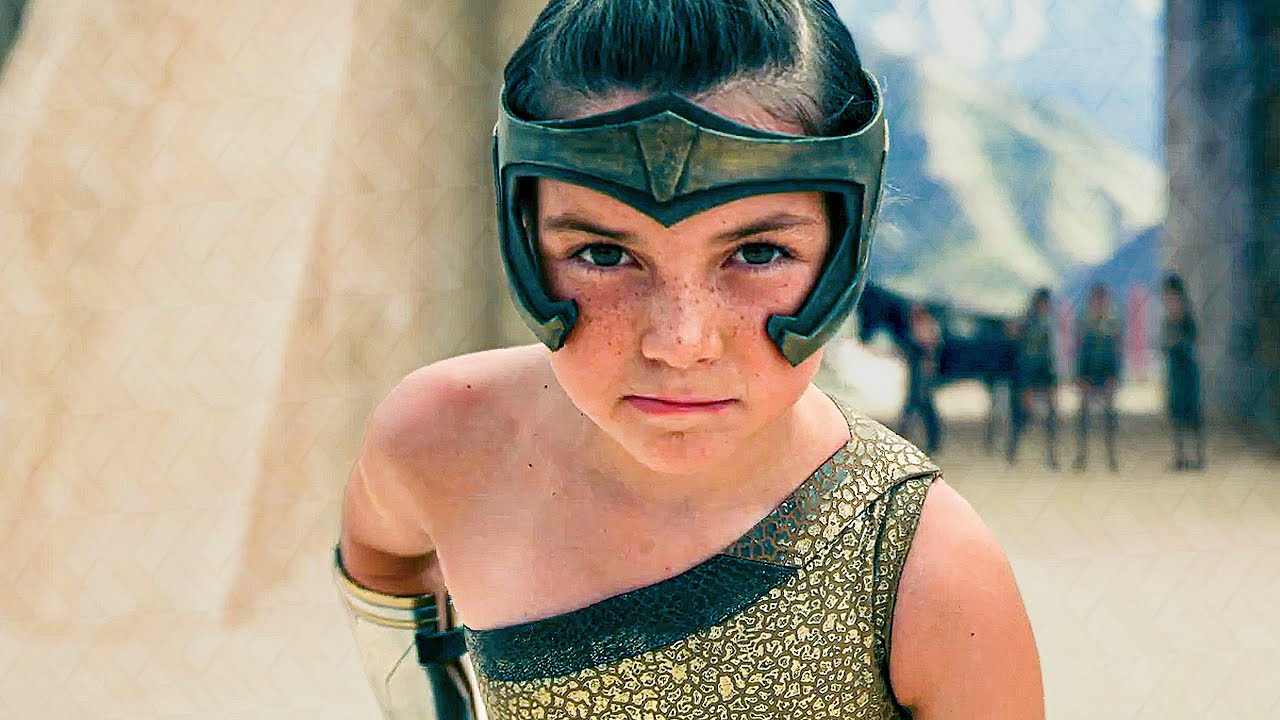 Anyhow, besides a silly 80’s mall sequence where Wonder Woman goes after some bad guys robbing a jewelry store (which rivals the horrible opening bit in “Superman III” where Clark Kent basically saves people set to a sassy musical score), the 1980’s setting doesn’t really add much atmosphere or life to the proceedings. It could have taken place in 2020, adjusting a few things in the background, and it would have been the same film.

And am I insane or did Diana say, in the previous films, that she had “walked away from mankind for 100 years” after 1918?

Because I’m pretty sure she did, which means we shouldn’t even be watching this.

And then there’s the rest of the mess.

We’re introduced to Barbara Minerva who you KNOW is going to be the villain later on because she’s so pathetic, even Diana shuns her at first (before agreeing to go out to dinner with her, where she actually utters the wholly unbelievable line, “You’re so personable, Barbara”…sigh…). This is all kinda shoved to the back burner because Diana suddenly has to deal with the fact that she’s accidentally resurrected Steve Trevor. Diana, by the way, “only sees Steve”, which is eyeroll-inducing.

Thankfully, the movie jumps the tracks and skips to Max Lord who is transformed from his Justice League-forming comic book counterpart to Donald Trump on steroids.

For what it’s worth, Lord is the best part of this film. Playing him with a surprising amount of emotional range and depth, Pedro Pascal portrays Lord as a man conflicted, drunk on power, fueled by his tumultuous past involving a very abusive father. At his core, he’s a child screaming for help, just like his son, Alistair (Lucian Perez) who just wants to be loved like Max wanted to be loved at his age. Their bond and Max’s love for his son gives the film its heartbeat.

And that’s a good thing because the rest of the movie is so mind-numbingly ludicrous (Diana flailing and waving her arms while floating through the air in slow-motion and that aforementioned, godforsaken jet plane sequence — are hilariously bad), it makes “Aquaman” look like a flawless master class in directorial execution. 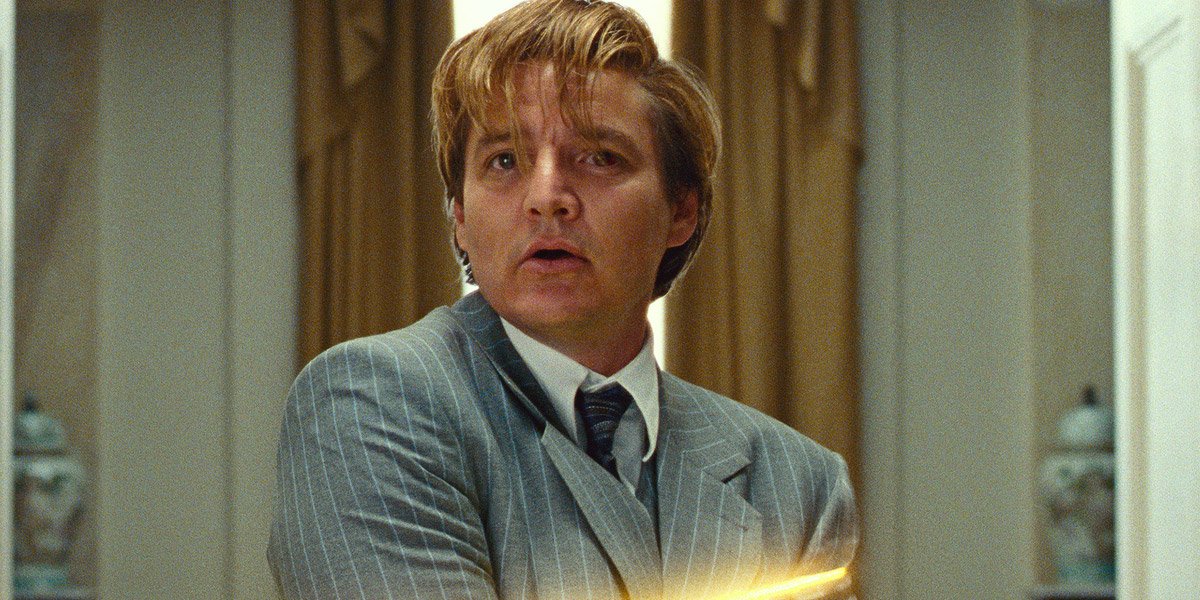 First, the “wishing stone” plot is just mind-numbingly stupid. Here’s this stone that has magical powers that’s just bestowed upon Barbara by the FBI so she can “investigate it” for some reason. Max Lord gets a hold of it because he knows what it is and how to use it and he basically makes his wish to “become the stone” so he can just grant everyone wishes which will, in turn, make him rich and powerful. Also, sometimes, the stone allows the wisher to have more than one wish even though the previous rule was that they ONLY got one wish and this rule changes because of plot convenience.

Second, the acting sucks. Yeah, Pedro Pascal has a GREAT time playing Max and his hammy approach to Lord is forgivable but I STILL don’t see what everyone else sees in Gal Gadot. I just don’t.

In my review for the original “Wonder Woman”, I said that Gadot reminded me of actress Adrianna Miles in the cult B-movie, “Werewolf”.

I’m doubling down on this.

Gadot gives a Razzie Award-worthy performance, marble-mouthing her way through the film and reciting the rest of her lines like a depressed robot on Prozac. What’s worse is that she and Chris Pine have no chemistry whatsoever and watching her go from Fierce Amazon Warrior to fawning over Steve and acting like he’s the greatest man who was EVER a man’s man, is just cringe-inducing. There’s literally nothing appealing about Steve in this picture as Chris Pine plays him like a clueless goofball, a man out of his own time, who tags along because, hey, he gets to be with Wonder Woman and who doesn’t want that?

Wiig is fine as Barbara who later becomes Wonder Woman’s comic book arch-enemy, The Cheetah, though I almost felt like there needed to be some sort of angle where Diana falls for Barbara — until Steve re-enters the picture. Alas, this never happens but I thought Wiig and Gadot had far more chemistry than Gadot and Pine. While it’s fitting that a character like Barbara gets pushed off for something more interesting, it’s also a shame. She goes from 0-to-Kinda-Evil, sporting the worst cat make-up since the recent “Cats” movie, I shit you not. It’s amateur hour, resembling something a face-painter at a parking lot circus would do to a kid. All that’s missing are fake “whiskers” and a “button nose” to complete the “effect”.

While the whole affair is visually spectacular, it just collapses under its own weight, showcasing two villains when it only really needed one and culminating in a noisy, messy, yelly, screamy finale which comes off more hokey than it is dramatic.

“Wonder Woman 1984” isn’t the worst film of 2020 (“Tenet” comes to mind for that title). It’s not even the worst of the DCEU film series (“Batman v. Superman” holds that title) but it comes awfully close to being both.

(P.S. Make sure you stay for the equally-insipid, irritating and now-obligatory “mid-credits” scene involving a familiar face which will make you roll your eyes so far back in your head, you’ll travel back in time. When a film botches its own easter eggs, you know you’re watching a bad movie.)